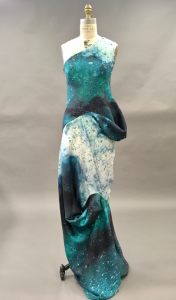 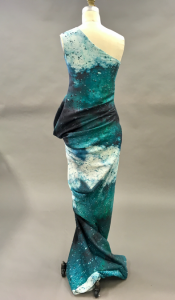 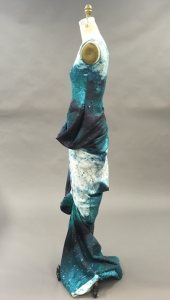 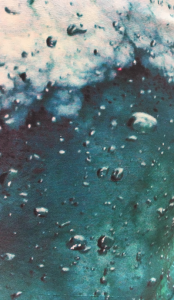 Mariana Arc is a textile and apparel design inspired by the global issue of climate change. Scientists agree that climate change is caused by greenhouse gasses, e.g., carbon dioxide, that trap heat in the atmosphere and warm the planet (Environmental Protection Agency, 2018). A warmer planet leads to loss of polar ice, which rises sea levels, threatening polar species and coastal communities (Mackintosh, 2017). Greenhouse gasses are released into the atmosphere by two sources: human activity, such as the burning of fossil fuels, and natural processes, such as volcanic activity (Callery, 2018). Mariana Arc brings attention to the issue of climate change with a textile design created from images of carbon dioxide (CO2) and sulfur dioxide (SO2) and a subtraction cut design reflecting the release of these gasses into the atmosphere.

Mariana Arc is one of a series of activist textile and apparel designs aimed at bringing continued awareness and focus to the issue of climate change at a time when the U.S. is actively moving away from addressing or even acknowledging the issue (see Gresgo, Parker, & Howard, 2018). Creative designs, including textile and apparel designs, can be used as an activist medium to communicate positions on social and environmental issues (Fuad-Luke, 2009). Prior apparel design researchers have created apparel designs emphasizing social and environmental issues such as racism (Reddy-Best, 2013), coral bleaching (Martindale, 2017), and uranium pollution (Hahn & Collier, 2017). The current design builds on this prior design activism by combining the technique with textile design and an experimental method of patternmaking: subtraction cutting.

The pattern for the garment was created using a combination of draping and subtraction cutting (Roberts, 2013). Subtraction cutting is a newer form of garment construction in which the designer creates a garment by envisioning the human body moving through tubes or folds of fabric. Shapes are then removed from the fabric in order to accommodate the body (Roberts, 2013). Working in half-scale, the subtraction cutting process for this design began with a long rectangular piece of fabric that was stitched together at the sides to form a tube. The bodice of the garment was then draped from the top of the tube and rounded shapes were subtracted from the middle and bottom of the tube and stitched to one another. This process created negative spaces inside the garment that could accommodate a body. The pattern resulting from this process was then digitized and resized to full scale.

The textile design for the fabric was created in Adobe Photoshop using non-copyrighted images of an underwater volcanic eruption on Mariana Arc captured by the U.S. National Oceanic and Atmospheric Administration. The images showed the dramatic release of CO2 and SO2 into the atmosphere. First, a repeat print of CO2 and SO2 bubbles was created. This textile print was then layered over the digitized patterns. Further images of the volcanic CO2 and SO2 release were then manipulated and placed on varying positions on the digitized patterns to create an engineered print that reflected the movement of gasses into the atmosphere. The engineered print/apparel pattern were printed on silk shantung using a Mimaki TX2-1600 digital textile printer and the garment was constructed.
The resulting design is asymmetrical with diagonal darts and seams shaping the bodice with voluminous shapes at the hip, knee, and hem. The diagonal lines and voluminous shapes contributed both to the cohesion and visual interest of the design, but also reflected the inspiration of the piece, the release of CO2 into the atmosphere. The asymmetry and repetition of color also serves to add movement to the piece, again reflecting the inspiration.

Mariana Arc is an activist piece that highlights the issue of climate change. The textile design, silhouette, and design details all reflect the image and motion of greenhouse gasses being released into the atmosphere, contributing to climate change and rising sea levels. The design incorporates design activism with textile design and experimental patternmaking, thus contributing to the design field by demonstrating the use of technology and new methods of patternmaking for design activism.