The separation between areas of conflict and areas of peace are starkly evident in satellite pictures of the world at night. Where there is peace and wealth, lights abound; where there is war and poverty, darkness pervades. This piece was an exploration of themes of conflict, peace, separation, and unity using digital printing and e-textile technologies. 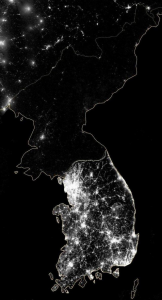 The print for the garment was created from non-copyrighted, public-use satellite images of the earth at night (Simmons, 2012; “Visible,” 2016). According to Carlowicz (2012), images of the earth at night can clearly reveal the impact of human activity on the world. Areas of conflict were isolated from the satellite images, transformed and placed on the garment pattern in Photoshop to reflect the separation between conflict and peace, and printed using a Mimaki TX2-1600 digital textile printer.

The print was placed on the garment so that the front is focused on North Korea and South Korea. The bright lights of South Korea can be seen fading to the dimly lit North Korea. The print on the bodice is a reflection of the print on the skirt. Tensions between these two countries have resulted in the stark contrast between light and dark seen on the print. In South Korea, citizens use 10,162-kilowatt hours of power per year compared to North Korean citizens who use only 739-kilowatt hours due to a governmental preference for military nuclear spending over food and energy expenditures (Stone, 2014).

The print on the back of the garment is focused on Syria. The increasing conflict in Syria has resulted in a 74% decrease in Syria’s lights between 2011 and 2014 (Li & Li, 2014). The decrease in lights has been attributed to a reduction in fuel consumption due to 7.6 million displaced Syrians and 220,000 deaths (Harrington, 2015). The print shows the current level of lights shining in 2016 and highlights the devastation that the people of Syria have endured due to this conflict.

The worsening situation in Syria and increasing tensions between North Korea and South Korea are further illuminated in the garment through the use of LED lighting. The inner layer of the garment is wired with eight strings of mini LED lights that were connected to a Lilypad Arduino board that was programmed to slowly fade the lights off and on to represent the decrease in lights that occurs with conflict and the increase in lights that could occur with peace and unity. The Lilypad board is powered by four rechargeable AAA batteries in one of the side pockets that can be turned on or off with a switch.

The garment consists of three layers: the top print layer, an inner layer with the lights and Lilypad board, and an under layer of lining and tulle. To further emphasize the themes, the garment was made from two contrasting fabrics. The pleated skirt was made from a cotton sateen fabric, while the bodice was made of a silk shantung fabric. The bodice is supported by boning and the skirt features 1″ pleats and has a gradual increase in length from front to back. The work was completed in March of 2016 and measures bust: 34.5″, waist: 25″, hip: 36″, and length: 57″. 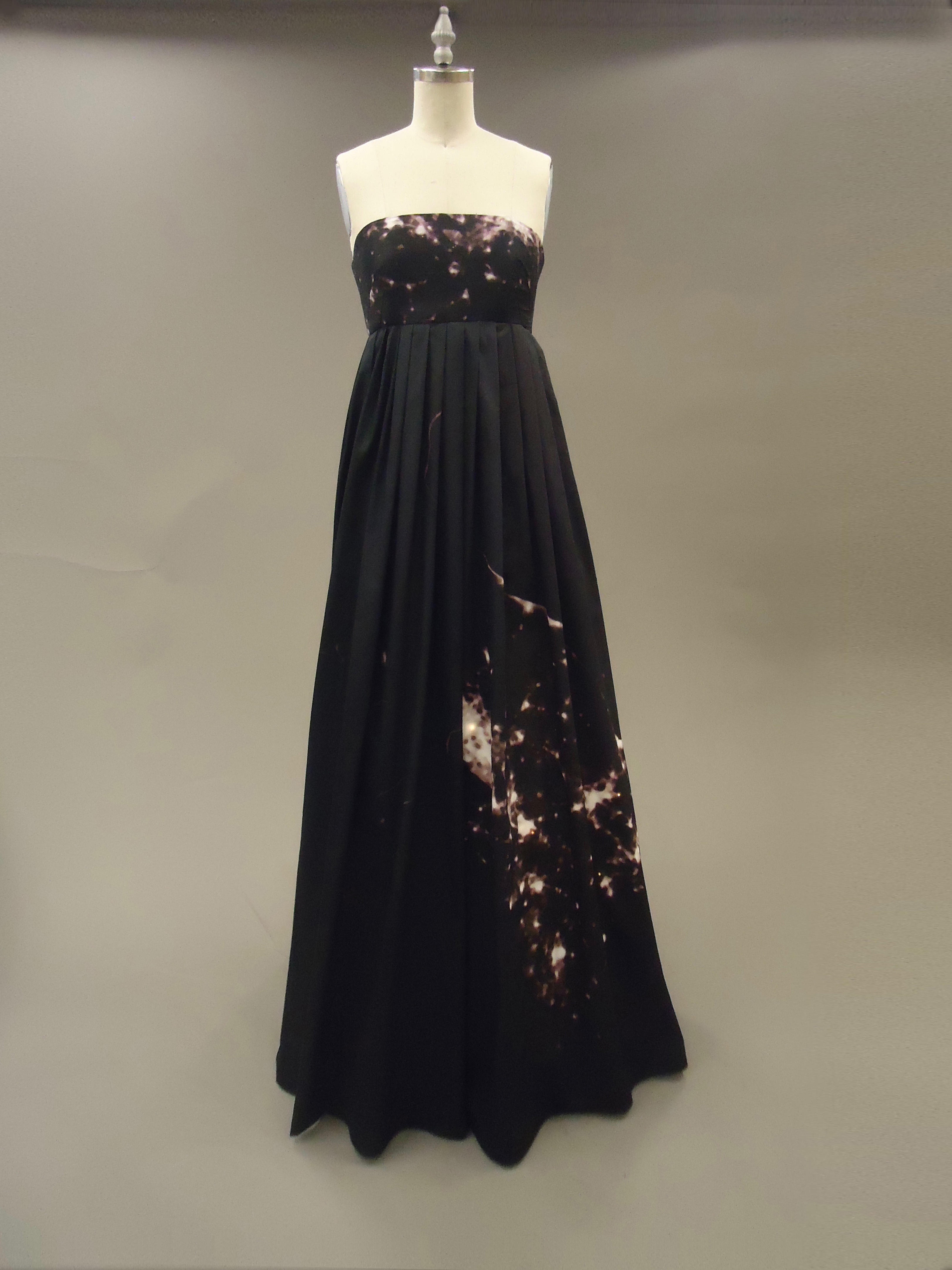 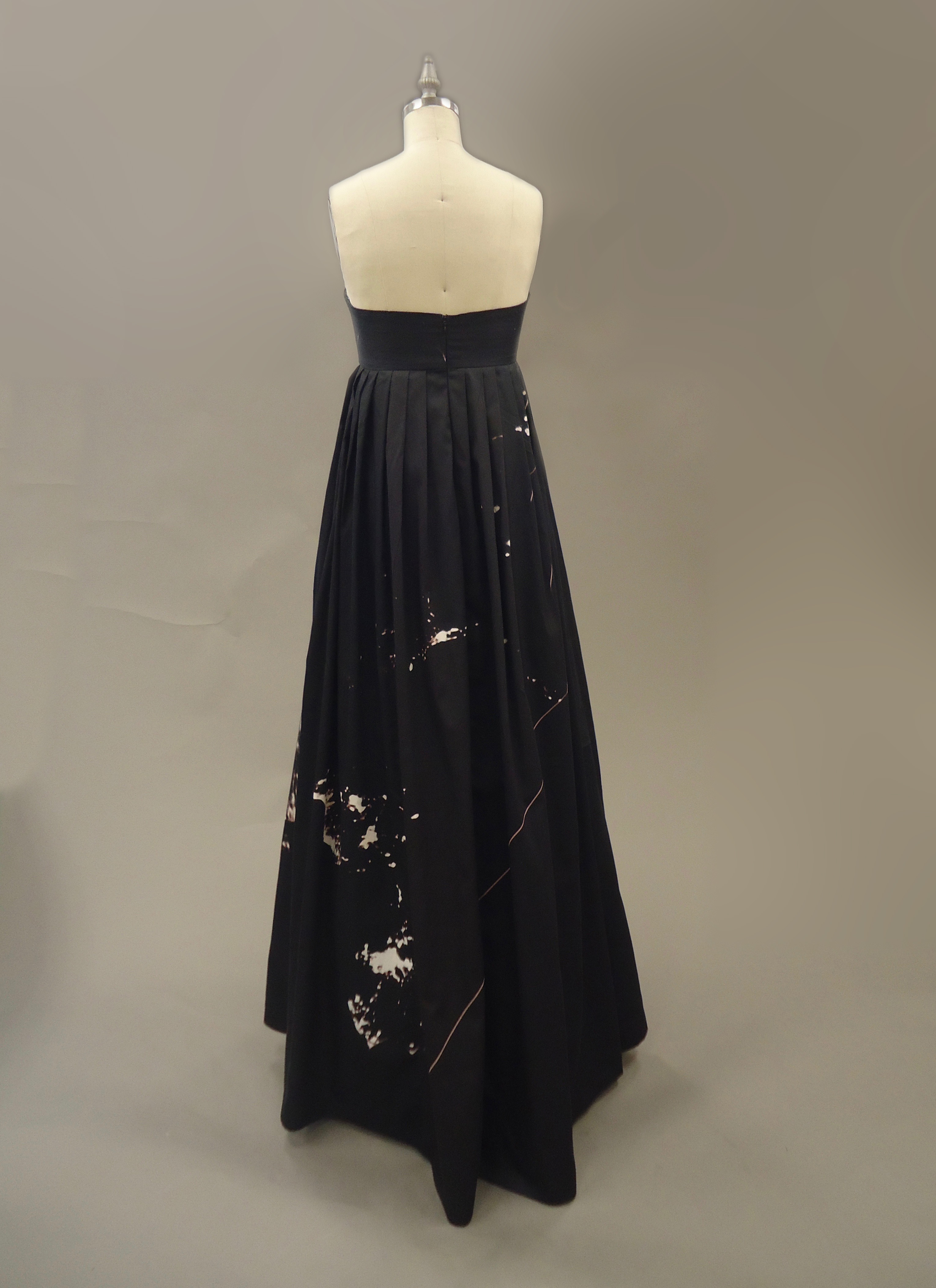 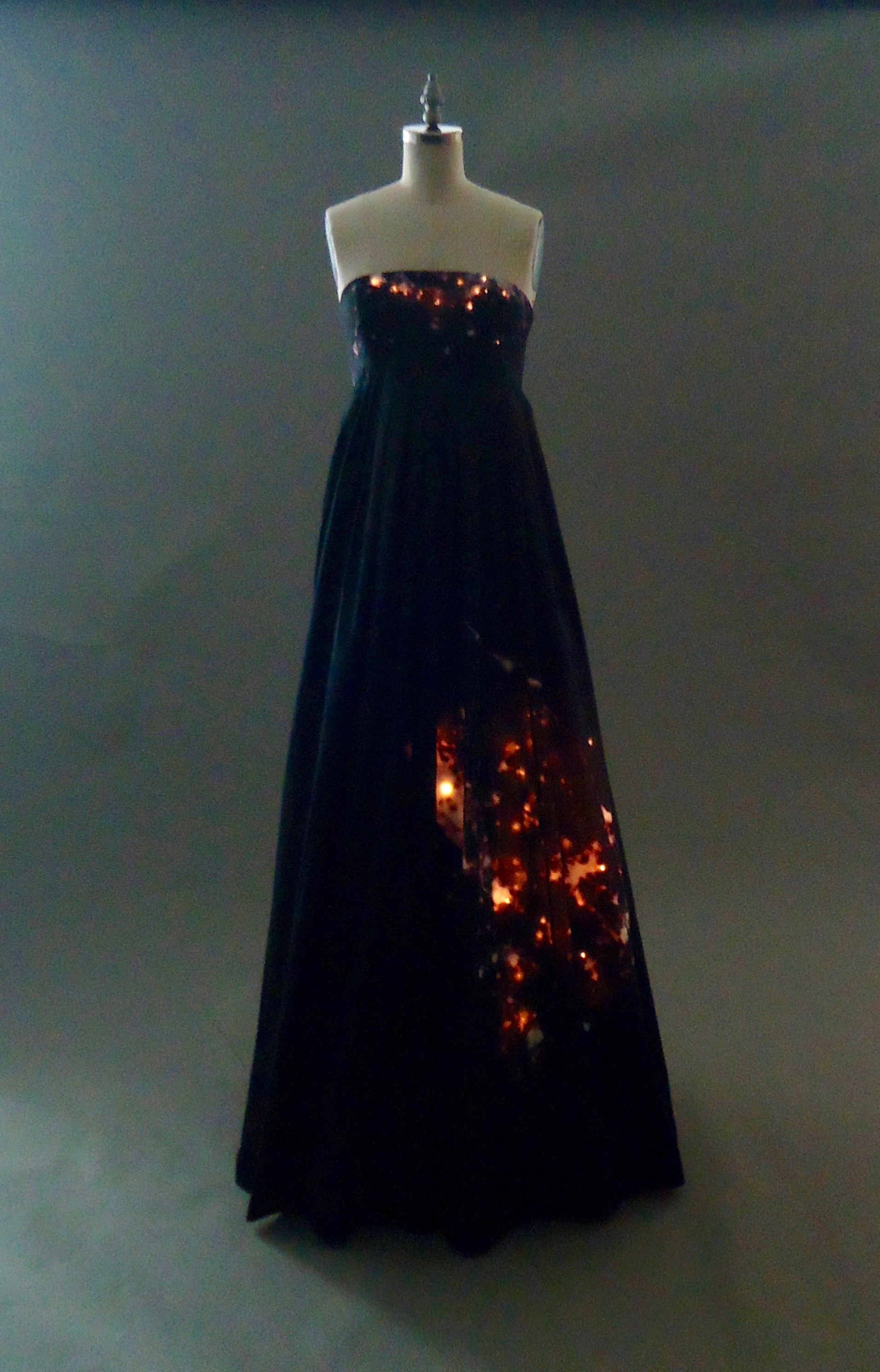